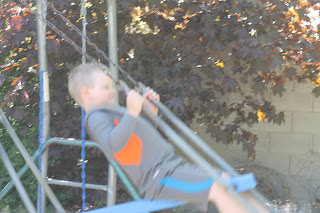 Twenty years ago when we lived in our first home, we bought Bossy, Gym Rat, and Drama Queen a swingset. It was expensive and my sweetie sunk it two-feet deep into concrete so that it wouldn't tip when they were sailing as high as the fence. 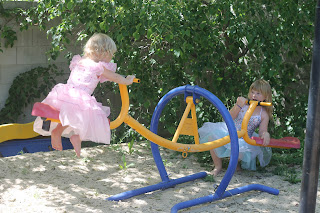 Unfortunately, it wasn't long before we decided to sell that house and get a bigger place. My sweetie had invested about $200 into the swingset, so he dug up the concrete and loaded it on the truck and drove it to the new place. That swingset is still in my backyard and it still gets tons of use. 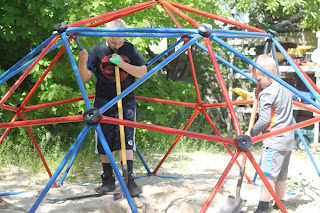 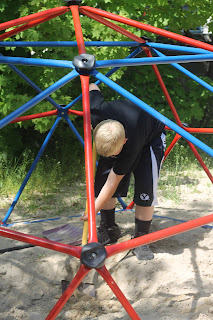 So several years ago we were in Sam's Club when we saw a brightly-colored teeter-totter. It was pretty heavy duty so the older kids could even use it. They also had a spider-like set of monkey bars that I knew the kids would love. Sadly, we couldn't afford both so we chose the teeter-totter.

The kids loved it so much that near the end of the summer we decided that we wanted to get the spider even though it was still a little beyond our budget. Unfortunately, it was no longer available...until now! 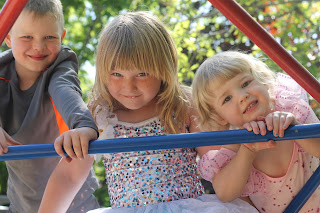 Last time we were in Sam's, we didn't hesitate, my sweetie got one of those flat-bed carts and we made the purchase. It took him several hours to put it together, but the kids have loved it! Even my Girl Scouts thought it was a hit.

Hmmm....maybe it's finally time to replace that swingset...

We have a Creative playthings swing set, this one to be exact...

Ours also has a rope ladder. We bought it 12 years ago, have had to replace the access ladder, as well as the top swing bar and end ladder. Total so far, $3000, with the replacement parts the last few years. So it has been about $25 a months?

Oh that does look fuN! I saw one of those heavy duty teeter totters at a yard sale recently, but couldn't figure out how I would've gotten it home, so I didn't buy it.

I thought you were going to talk about live spiders and I normally avoid those posts! Looks like a fun item and glad you were able to get one. Enjoy!

To be honest, I almost didn't read your post due to the title. I hate spiders and was scrolling slowly so I could stop before seeing the 'spider'! I was SO glad to read it was only play equipment! LOVE those spiders! Looks like your kids love it too!

I can see how fun they are having on these. Remember to keep them all if you stay in that home because you are probably going to have a slew of grandchildren.
Blessings and hugs!

If you are seriously going to get ride of the swing set I will gladly dig it out and take it.