I've told you that we've been trying to eat a little more healthy (I even had carrot cake for my birthday!). The Bountiful Baskets have helped us work more vegetables into our diet. This is a terrible hardship for Sport who confided in me a few days ago, "I HATE Bountiful Baskets!" Although I've noticed that even he is trying a few more new things.

Salads have started showing up at every meal although sometimes they are passed without appearing on any plates. Greens can get pretty boring around here so Teach has put herself in charge of livening up the salads and making them more interesting. She has added cucumbers, carrots, olives, stuff like that. And they have been more fun...I guess... 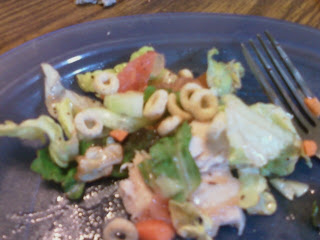 So yesterday the Drama Queen and I sat down for lunch. She was hoping for a nice sandwich, but I pulled out the salad. Baby Doll is not much of a salad eater, so I poured her a bowl of Cheerios. She started crunching happily away as the Drama Queen stirred her greens sadly around her plate. Suddenly she said, "I wonder if Cheerios would make good croutons?" I looked at her like she was crazy, then I grabbed a handful and tossed them into my salad. I caught up a big bite on my fork and chewed for a moment. They were actually pretty good!

The Drama Queen just looked at me. Then she solemnly said, "You know you're a real mom when you start putting Cheerios in your salad."

I already told you my worst dentist story, but over the years I have been to the dentist many times. After that horrible experience as a child, I became terribly afraid of having my teeth worked on. I specifically remember hiding from my mother in the back of my closet so that I wouldn't have to go in for another appointment not too long after I had that tooth pulled. She was SOOO angry when she finally found me! I got a well-deserved spanking that day... 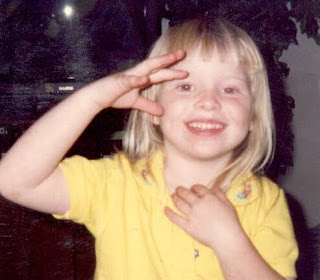 I have been mostly blessed with pretty good teeth, so I had only a couple of fillings when I got married. My sweetie is the exact opposite! More than half of his teeth have been crowned and he still has some trouble with them. It seems to be genetic, about half our kids have teeth like mine and half have teeth like his.

Our first experience with a pediatric dentist was when Teach was about 3. She had been complaining about her teeth and even though we had pretty good insurance, I thought she was really too young to visit the dentist. Boy was I wrong! Our regular dentist wouldn't see kids under 5, so we started looking for someone else. It took us several weeks to get her in to their busy schedule. On the first visit, they told us that she definitely needed work done and to reschedule. Because of her age, they wanted to do a sedation. We were young and inexperienced in these matters, so we just took their advice and went with it.

At that second appointment, the anesthesiologist came out into the waiting room and gave her a shot. She immediately went limp in my sweetie's arms. It was the most terrifying thing! It was like she was dead. He carried her back to the chair and when he returned we huddled in our seats silently wondering if our tiny daughter would survive this visit.

She had four or five cavities filled and a silver crown put on the tooth they couldn't save. She kept that crown in her mouth for over five years and we were very grateful when it finally fell out.

Now I have the kids see the dentist when they are three, that is until they recommended that Baby Doll be seen as soon as her 1-year molars came in. What about you? When do you first take your kids to see the dentist?
Posted by Mom of 12 at 1/30/2012 11:26:00 AM 13 comments: 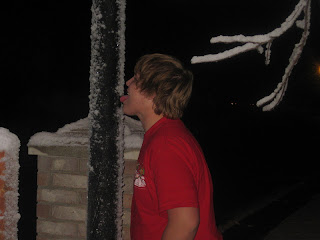 You know that I love guest blogging just like I guest-blogged about my Merit Badge accomplishment and the Marching Band Tour I went to. Right now, I’m about to talk about one Christmas that has happened in 2008, the year when my little brother, Curly was born. There was a bunch of snow in 2008. That much snow was all we had in that year then the snow we had for this Christmas in 2011. That’s kind of sad huh? Well, some people in this family were glad that there wasn’t snow, so that they didn’t have to be scared of driving in it or slip on ice. Well another problem that used to happen was that with this snow we had in 2008, I went to stick my tongue on our lamppost on the edge of our driveway.

That’s kind of like the movie A Christmas Story, the part where the kids forced a kid to stick his tongue on a flag pole. I was lucky that I didn’t get my tongue all the way stuck to the lamppost. Our lamppost was made of fiberglass instead of metal, but everyone thought that I was being funny. They knew I wouldn’t really get my tongue stuck.

Okay, remember what I told you about the part of the kids forcing a kid to stick his tongue on a flagpole? Well I think that’s bullying to others. I’ve never been bullied at school in my life, sort of. I just think it’s a lesson that we do not bully others, otherwise, you’ll get bullied yourself. I made this video for Reflections that talks about bullying. It’s actually a music video with the some parts of the family showing of how bullying is bad.

Now you realized that those are really wonderful things on how to make the world a better place, by just being nice to other people. So whenever you get bullied or put in a situation like that, don’t make it go wrong, just fix it and then the problem will be solved.


I grew up visiting the dentist once a year. Dad had pretty good insurance through the school district, so Mom made sure we always got our checkups. You all know I grew up in small-town Utah, so when it came to having someone drill our teeth, there was only one game in town...Doc __. I absolutely remember his name, but I'm leaving it off on purpose and I'll tell you why.

I never like the smell of the dentist's office, but not the same way I dislike it now. As a kid, our dentist's office smelled like alcohol...and I don't mean the rubbing kind! He was generally pretty drunk when he was working on our teeth.

I was about 9 or 10 years old the first time I had a tooth pulled. It was pretty decayed and the dentist said it would fall out soon anyway. So we scheduled a time and when that day came around, Mom wasn't able to go with me for some strange reason. The dentist's office was about 2 blocks from my house and since it was in the mid 1970s, no one even considered that I might not be safe. I walked over by myself, sat in the 6-seater waiting room, and when it was my turn, I climbed in the chair.

I was not happy! Doc numbed me up (or so he thought) and then waited for a few minutes for the medicine to kick in. Then he started twisting and yanking. When I protested...LOUDLY!...he gave me another shot of Novocaine and a few more minutes. When he came back, he again pulled out the pliers. I wiggled and squirmed while he assured me there would be no pain. (He was wrong!)

When he was finally finished, he handed me a little envelope with my tooth in it. He had packed my jaw with gauze since it kept seeping blood everywhere. I bit hard on that little cotton roll, grabbed the envelope and literally ran out of the office. Tears streamed down my face and I promised myself I would never step foot in that torture chamber again. At least I had the reassurance that the tooth fairy would be visiting later. I opened the tiny envelope and peaked inside. That tooth was broken in half from the effort of pulling it and it still had two long roots that had stubbornly refused to leave my mouth.

We love our pediatric dentist now! He does a great job with the kids. Baby Doll had her first checkup this week. Scout and Curly also visited with the dentist and neither one had any cavities. Curly was very cooperative, but Scout did NOT want her teeth brushed. I guess I'm the meanest mom ever, because I insisted they brush her teeth even though she would have been more than happy to just leave. Maybe it's the way I was raised, but you don't get out of the dentist's chair without experiencing a little pain...and the smell of alcohol.