Way back around Scout's birthday in November, I was at the grocery store buying ice cream. There is a company in Utah called Farr's, I don't know, maybe they are other places too, but they make really good chocolate marshmallow ice cream and that is my sweetie's favorite so I always check them when I go to one particular store.

But when I pulled the first buckets out of the cooler, I noticed that they had an advertisement for one of those new trampoline places. Then I looked a little closer. It wasn't just an ad, it was a free hour of jumping at Get Air! I knew the kids would love that, so I quickly checked all the buckets until I had several with the offer.

It wouldn't be enough for the whole family, but maybe we could pick up some next time and the time after until we had a dozen. They were good until May 31, so we had plenty of time.

For the next several months, every time we shopped at that particular store, we checked the ice cream buckets. The freebies were only good Monday through Thursday, so that made it a little tricky for us to use them since the closest facility for about 45 minutes away. Teach really wanted to do it before she left on her mission, but that wasn't possible so they have just been sitting there in the pantry, taunting me to change the calendar.

So we did it! I cleared everyone's activities from 6:30 on and we piled into the big van. I even had enough buckets for Bossy's family to join us. I, of course, would not be doing ANY jumping. Just climbing in and out of the van was rather painful. My sweetie decided he would pass too, so 12 was just perfect.

We decided to stop at Krispee Kremes while we were there to pick up the kids' free donuts for their good grades. We walked out with 5 1/2 dozen donuts for $12.00 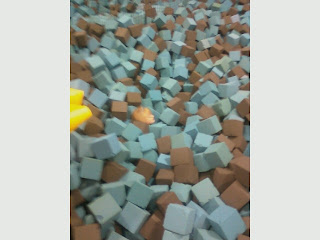 We arrived just before 8:00. The kids were each given wrist bands that were good for an hour. Then they all took off in different directions to explore the place. It was made out of a huge warehouse, with trampolines everywhere. One area had half a dozen foam pits and most of the kids loved those (except for Bossy, Gamer, Dog Walker, and Prima Donna...all four of them got stuck!)

There was also a dodge ball area and an area for the little ones to play. The hour went way too fast! We would loved to have stayed longer, but the Dog Walker had to be to work by 10:00 and we still had kids with homework to do, so we piled back into the van and headed for home.

The Dog Walker made it to work on time with only minutes to spare, and Sport was up way too late finishing his Lacrosse report, but it was worth it!

You're so good! Just look at all that fun going on!!!

I honestly think this was Mom's way of making sure I didn't cram for the AP geography test I had to take Friday morning...

You always have such awesome outings with the children. I love all that you do with your family.
Blessings to you all!