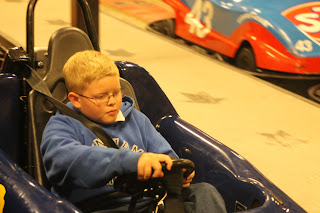 My sweetie told you all about our adventure to Planet Play on Saturday, but he missed one part of the story I wanted to share. After we finished our pizza buffet, we headed into the arcade. We had two-hour passes for the kids, and we stupidly assumed that would get them anywhere. Wrong!

The first place we went was the go-carts. But after we checked the size requirements, we realized that Sport was the only one of the kids that could go as a single rider. So we put him in line and we headed for the bumper cars. Curly was very excited about riding on them! Unfortunately, the ride was totally dark and presumably out of order. So we moved to the mini bowling area. Two lanes were open so we swiped our cards but got no response. Apparently they were out of order too. We didn't want to wait for any of the other 4 lanes to open up so we moved to the kids play place.

The little car was also out of order, but the kids climbed onto the Merry-go-round. Once again the cards didn't work! We had to use the cash cards just to get it to go. After three times around they decided to play on the slides which were free. I was starting to feel like we had wasted our money when my sweetie suggested mini golf. 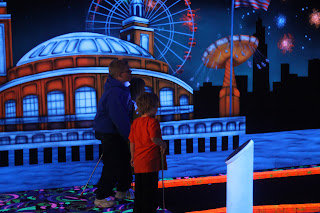 It was the neon kind with black lighting and the kids loved it. Even Baby Doll had her own ball and club. I got my first ever hole-in-one! When we finished our game (we went around twice), we headed back over for bowling. Lanes were open so we all took a turn. Meanwhile, Sport went back to the go-cart line.

My sweetie went to check on him and reported back that it was almost his turn and he wanted someone to watch him drive. My sweetie suggested that Scout and I go and maybe we could still have time to ride in one of the two-man cars. I hadn't really thought about getting on the ride, but Scout was so excited that I grabbed her hand and we took off for the track leaving my sweetie with Curly and Baby Doll to finish up the games of bowling. 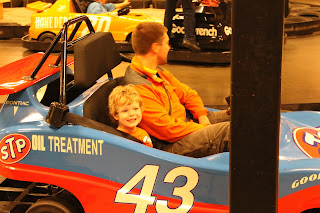 When we arrived, we quickly took our place in the split line, one line for single riders and the other for the two-man cars. The kid running the ride told us that this would be the last run of the night for the two-man cars. Scout smiled since we were already in the group and we turned to watch  the single riders (with Sport right at the front!) get ready for their race.

They roped off the lines shortly after, but my sweetie and the little kids showed up and Curly slipped under the rope. He wanted to ride! I asked Scout if she would be willing to give up her space in the car and she quickly declined. Curly was so sad! He really wanted a turn. He ducked back under the rope and complained to his dad, but somebody had to watch Baby Doll so there was no way that would work. 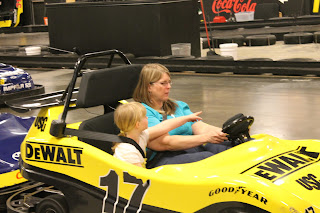 So he came back over to me with his sad little face, hoping maybe Scout had changed her mind. She hadn't. But a guy in the single-rider line with his two sons noticed our predicament. He seemed like a nice guy and we had been chatting for the last several minutes already, so I asked him if he would be willing to take Curly in a two-man car.

He asked his sons if they were ok with that and then he smiled at Curly and agreed. At first Curly was a little nervous about this development since we are always so worried about strangers, but after a few minutes he warmed to the idea and started bouncing around waiting for our turn.

As we took our place at the starting line, I happened to mention to Curly's driver that we were going to win the race. But he politely told Curly to inform me that we were dreaming. I had never driven a real go cart before and I was surprised how much fun it was! But he was right, I think he was a pro since he kept cutting in front of our car every time we tried to pass. 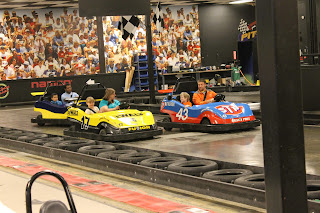 That's OK, Curly's excited little face and hysterical laugh made it worth losing. And the kid managing the ride? He even saved a single-rider car so our new friend could ride with his boys too.

Planet Play sounds like a blast! Glad the little kiddos got to have a good time there, even if some of the fun attractions weren't operating! Sounds like you guys have been keeping yourselves busy this past week!

It looks like you all had a great time. You do so many fun kids with your children; I love it.
I was feeling sad at first because so many of the rides had problems; but the ending was fantastic.
Loved the pictures and thoughts.
Blessings to you all!

How nice of him to take Curly in a car with him!