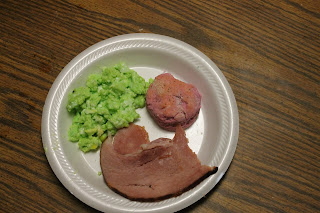 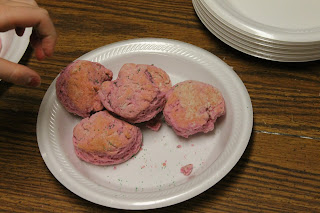 Such a beautiful day for a birthday! I'm sure there are many more, but I definitely know of two, Dr. Seuss and Franco (the dog). I'm a big jerk I know, but I just couldn't get that excited about celebrating the dog's birthday. Maybe it had something to do with the fact that he pooped on my bedroom floor today.

But I have to confess that watching Baby Doll sing "Happy Birthday" and give him a treat softened me up a bit. The Gym Rat says we are having a family party for him tomorrow. I asked him if he was going to make a cake and he said, "No," he was making "meat." He said he plans to share with us, whatever that means. I'll keep you posted on that one. 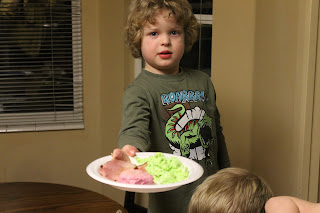 The other birthday my sweetie celebrated last night. He made green eggs and ham and purple biscuits for the kids for dinner while I was at the basketball games. He has real issues with food that is the wrong color, so this was a big thing for him.

He even took a bunch of pictures so he could share it with you (and me). I hope you did something fun today. We had warm beautiful weather here and the kids delivered almost all the rest of the cookies.

﻿﻿We have never gotten our cookies out so quickly! I'm certain it is divine intervention. Heavenly Father must think my life is chaotic enough right now without having to worry about cookies. Did I tell you I was summoned for Jury Duty next week?

I was pretty devastated when I got the card in the mail earlier this week but my sweetie was certain that I wouldn't have to report. He has been summoned about half a dozen times and he has never had to go in. That made me feel a little better since this was my first time.

﻿﻿So yesterday I called the recorded message expecting to hear my dismissal...

﻿
I have to report on Monday at 8:30 downtown. Oh don't get me wrong. I'm a firm believer in civic duty, it's just that with Teach's Farewell only 2 weeks away and lots of family and friends coming by, I really don't have a week to give up right now.

At least I don't have to worry about cookies too much...maybe I'll go read Green Eggs and Ham to Baby Doll. She's the only one still awake that would appreciate it except maybe the dog.

Can't you get out of jury duty if you have young children you need to care for?? Or is that just a texas thing? I hope you don't get picked for a jury, you definitely have enough going on right now!

Okay, that dog is SO cute! I'm a dog person, so I had to comment. Happy Birthday puppy! (oh, and Dr. Seuss too)

We (in AK) have the ability to go in and ask to reschedule for a later date. Maybe you can do that?

How can you be mad at that face! What a darling pup/dog!

Good luck with Jury Duty - they won't hunt you down if you ignore the letter. My son was on his mission when the jury letter came for him. I had every intention on calling and letting them know he was out of town but I never got around to it.

Know what, nobody came looking, or called or anything.

Green eggs and ham! Love it!
I hope you don't get picked for jury duty! I was able to get out of it by saying I had nobody to care for my kids!