I wrote this story a dozen years ago and this chapter still makes me cry. Or maybe I'm just hormonal, I don't know. Let me know what you think.

It took us about 20 minutes to get to the hospital.  I thought that because we were about the only car on the road that there wouldn’t be any cars in the parking lot either, but I was wrong.  I guess we weren’t the only ones spending our holiday at the hospital.
Kiy’s new room was on a different floor.  The elevators took forever and when they finally stopped at the right level, we had trouble finding the room number.  She was all the way down at the end of the hall in a private room.  I was a little nervous about seeing her again.  Kiy hadn’t looked much like herself with her swollen face and wires.  I slowed my steps until Neal shoved me from behind.  “Hurry up!” he mumbled.
“Cut it out,” Dad said quietly.
I picked up the pace as we turned the corner that led to Kiy’s hallway.  I could hear voices coming from her room.  Mom’s was definitely one of them, but I couldn’t make out the others.  I shrugged.  Must be a nurse, I thought to myself.
Kiy’s door was wide open, so I stepped inside her room.  The voices didn’t belong to nurses.  Aunt Laurie and Uncle Glen were standing just inside the door.  We didn’t see them very often, so I was pretty surprised that they would leave their family on Christmas Day just to see if Kiy was OK.  I said a quick “Hello,” and headed for Kiy’s bed.  It looked like the same bed she was in earlier.  It was like a crib except it was higher with huge silver circular bars instead of wooden slats.  The sheets were white and clean and she was covered with a little pink blanket.  Most of the wires were gone, but her tiny face was pretty swollen.  Her hair was still matted and sticky from the adhesive buttons on her forehead, and her eyes were tightly closed.
I carefully touched the blanket at her feet.  Earlier, her feet had still been mostly blue from the cold, but now they looked a healthy pink.  She was getting better!  “Did she wake up after I talked to her?” I asked.
Mom glanced up from her conversation with Aunt Laurie.  “Not yet,” she answered slowly.  I rubbed my finger across the bottom of Kiy’s tiny foot.  Her toes curled and she pulled away from me.  Even in her sleep she was ticklish!  Aunt Laurie’s voice caught my attention and I heard her say, “Why don’t you guys go downstairs and grab something to eat?  Glen and I can sit with her for a little while.”
I glanced quickly at Mom’s face.  She looked so tired!  She definitely needed a break.  “Yeah,” I said, “Neal and I can stay here too.  We’ll take care of Kiy.”
Mom looked at Dad and then she said, “That sounds like a good idea.”  Dad pulled her to her feet and she glanced around the room.  “We won’t be very long.”  Mom lingered by the bed and slowly stroked Kiy’s tiny arm before she left.  I don’t think she wanted to go, but she really needed to get away for a few minutes.
Aunt Laurie took off her coat and made herself comfortable on the couch.  Well, it was kind of a couch.  It looked like it could actually be a bed if it wanted.  Uncle Glen took the other half of the couch and picked up the remote for the TV.  Neal threw his coat in the corner and slid to the floor in front of the football game that Uncle Glen had chosen. 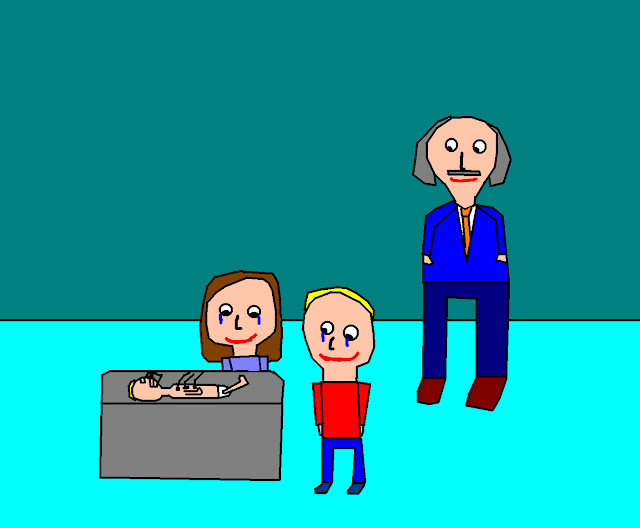 I slowly pulled off my coat and laid it across the only other chair in the room.  Why were they watching TV?  I thought we were supposed to be watching Kiy.  I moved back over to Kiy’s crib and reached for her pale little fingers.  I could see all of the blue veins right through her skin.  I leaned my head close to her ear and kissed her swollen cheek.  Then I softly hummed the “I Love You” song from Barney.  It was her favorite and after talking to her on the phone, I was sure that she could hear me even if it looked like she was asleep.  I finished my song and carefully watched her little chest rise and fall with every breath.  Yesterday, I wasn’t sure if I would ever see her tiny chest rise and fall again.  My mind wandered to those terrifying moments on the stairs when I held her freezing blue body and desperately tried to clear her throat so that she could breathe.
A tear slipped down my nose and landed in her hair.  She tossed her head restlessly, but her eyes didn’t open.  Oh, Kiy, why don’t you just wake up so that I can hold you and tell you that everything will be OK?  I rubbed her palm until it turned pink.  Her wrists were about as big around as my thumb!
Suddenly, her eyelashes fluttered and I saw a glimpse of her pale blue eyes.  “Kiy?” I whispered softly.  I didn’t want to share this moment with anyone.  “Are you awake, Sweetie?”  I rubbed her hand a little harder.  “It’s me, Kira,” I whispered.
Slowly, her eyes opened and she turned to look at me.  Her pupils were huge and she looked like she was on drugs.  For a minute, I could tell that she was afraid and she didn’t recognize me.  She closed her eyes slowly and then they opened again.  She looked at me and her lips moved without a sound.  Then her eyes closed again and I heard a tiny “Ra-ra.”
She didn’t have brain damage.  How could she when she knew me?  The tears wouldn’t stop as I stood there just holding her hand.  No one else seemed to notice.  They were busy watching the game.  Mom and Dad were still downstairs in the cafeteria and I could hear the nurse down the hall.  I had just received a wonderful Christmas gift.  Maybe one of the best Christmas gifts ever.  Kiy was going to be fine.
Posted by Mom of 12 at 3/26/2013 01:00:00 AM

It's great. Again I can't think of anything else to add.

And it made me cry too, I forgot to say that.

Love it. What a sweet moment for Kira.