Gamer, Taco and Burrito got back from YM’s camp down in Moab pretty late on Saturday. Gamer felt bad that I had finished installing the new kitchen floor while he was gone and he just wanted to work on the remodel project. He and the older boys brought all the cabinets in so we could dry fit the space and we realized two of the uppers where damaged during shipping. 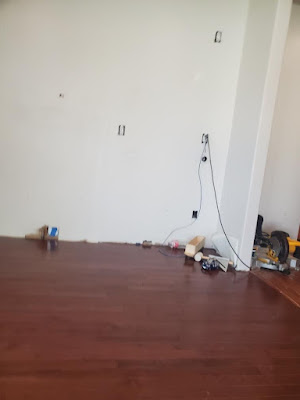 Sunday morning he knew I was stressed about getting supports for the green beans and weeding the neglected garden, so Gamer got up early to take care of the garden before church. He then spent the evening installing the new range hood. The best surprise Sunday was when Dog Walker brought over dinner for us. Not having a kitchen has made cooking challenging and we were very grateful for his service. 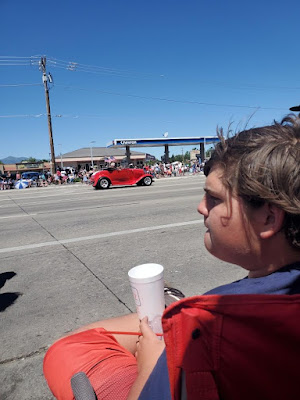 On Monday, Gamer and the boys got up early to put out flags. Afterwards, Gamer and I went to Home Depot (I highly recommend going at 7am on a holiday, it was dead.). We got our damaged cabinets reordered and picked up a few supplies we needed to continue our remodel project. We rushed home where Taco and Burrito had my car packed for the West Jordan City Parade. We were able to secure our normal spot. The wind was rough and it kept trying to take our easy-up across the street. At one point I went inside Smith’s and bought 100 lbs of kitty litter to try to tie it down with, but even the litter was no match for our crazy wind storm. The parade was poorly spaced this year and we often had 15 minutes between entries. Which isn’t surprising for being at the end of this particular parade, but Burrito was focused on holding down the easy-up and we missed his between-entry dance antics. 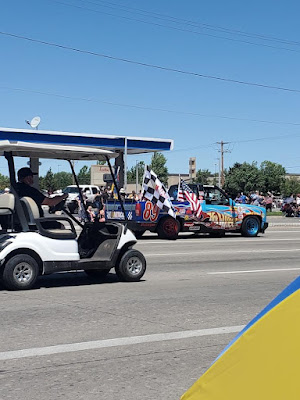 We also ended up with a group of adults that for some reason felt it necessary to stand in the street in front of all the small children with their phones to record the entire parade. Five adults filming the same parade... in its entirety. Skittles was disappointed with the five pieces of taffy he got. I was disappointed by the lack of entries. 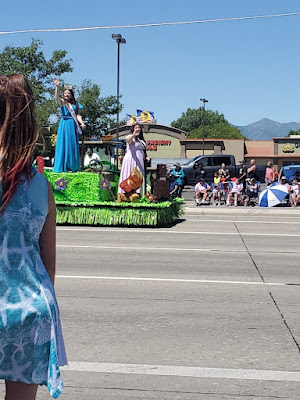 The early morning Murray parade ended up wiping out more than half the entries. The announcer commented towards the end they had 13 pages to read but skipped more than 5 pages worth of introductions. I can tell you from experience, walking the 1 mile Murray parade and then going straight to West Jordan is rough, but West Jordan is all downhill and both face away from the sun which is nice. Together they are about the same distance as the Day’s of 47 parade on the 24th, so it is great practice for the big one. I was surprised at the lack of city floats. 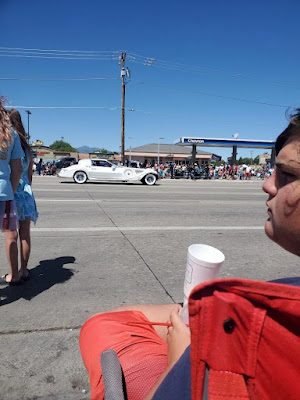 After the parade, the plan was to go home and install the uppers, but life has been hard post emergency surgery last month and I was exhausted. I suggested to Gamer that he could go fishing instead and the boys wanted to go to the splash pad. Gamer realized his license expired on the first so we made what was supposed to be a quick trip to Walmart that turned into back to school shopping (seriously their entire apparel department is on clearance). Afterward, he took off to go fish with Curly and I took a lovely nap. 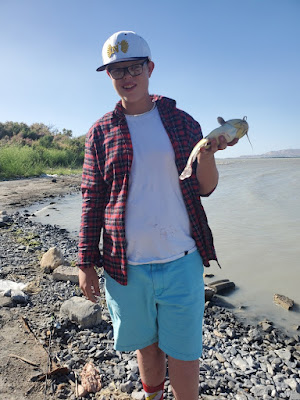 We had planned on going to the Sandy evening parade, but little Queso was sleeping so instead we just relaxed. Gamer had picked up some glow in the dark helicopter parachutes and Skittles was finally big enough to launch them himself. Bean Dip brought home treats from work. Taco grilled us some burgers. We dug into a fantastic watermelon and watched the neighbors light up the sky around us. 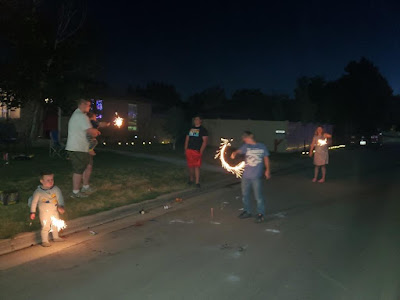 Traditionally, we host the fourth at our house, but I hadn’t sent invites out because without a kitchen life is hard. That didn’t stop people from gathering, around 9pm Dog Walker, Baby Doll, Curly, and Scout and her friends showed up with fireworks to add to the small box Gamer grabbed for Skittles since Mom and Dad were down with Covid. Then Burrito’s friend wandered over and shared his bounty of smoke bombs, tanks and sparklers with Skittles. Overall, it was the right amount of company, chaos and tradition. 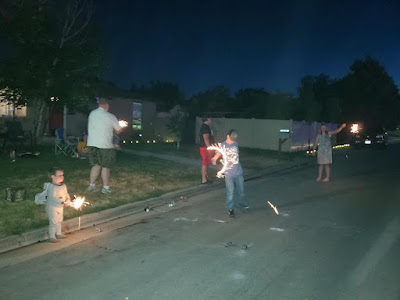 Sounds like a busy day! Can’t wait to see your kitchen all done. Missed watching the parades with you this year. -Drama Queen