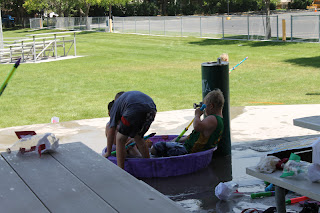 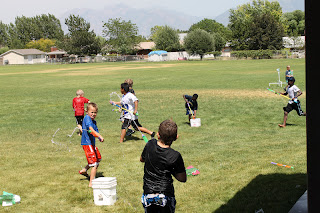 This week has been one of the hardest, busiest weeks in recent memory. But two of the brightest spots were birthday parties for Sport and Prima Donna. Sport just turned 9 today and we had his party with his friends yesterday. The best part was that we planned to have it in the bowery behind the church. There is a nice pavilion and a grassy field back there just right for shooting off water rockets. (And I didn't have to worry about cleaning my house.) 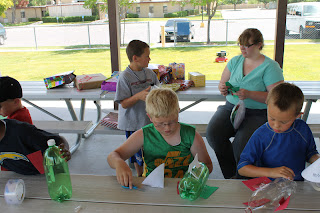 We told the boys to plan to get wet and bring a two-liter bottle if they had one. At 2:30 the cars started arriving. I think we ended up with 17 boys, but it was hard to say since they wouldn't sit still for more than 2 seconds at a time.

We started by making rockets. Princess and I spent over an hour cutting fins and cones. After the boys taped them to the bottles (most took about 2 minutes), they ran to the launch area. About the time they got halfway through the launch line, the Dog Walker started handing out water shooters. This was NOT according to plan! The rockets were supposed to take at least 45 minutes before the water fight started. I had two hours to entertain all these kids and we were only 20 minutes in and most of my activities had been exhausted.

The water fight went on for half an hour and the boys were drenched. About the top of the hour they started to lose interest so I called them together for cupcakes and presents. I think Sport could win a prize for the quickest gift-opener on the planet! 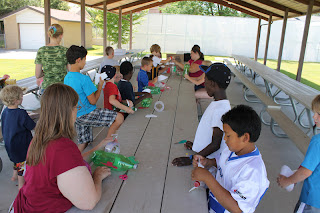 With 50 minutes to go, we just looked at each other.  My sweetie tried to get the boys back to the rocket launcher, while Bossy tried to initiate a game of tag. Things looked grim until I remembered most of these boys love sports so I sent Bossy to her van for a soccer ball. We split the boys up and they spent the next 30 minutes playing soccer.

It worked out perfectly. By the time parents started arriving the boys were migrating back to the launcher for one last hoorah. Within minutes, all the boys were gone. 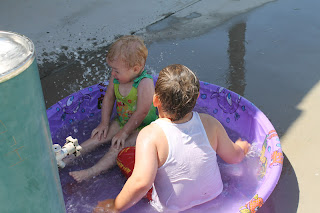 My favorite part was Baby Doll. She absolutely loved the little pool. This is the first time we had gotten it out for her and she didn't care if the water was cold. She splashed and played like a pro even before we put her swimming suit on. I swear, a regular diaper will hold about 2 cups of water!

Oh goodness! That party does sound a bit crazy! It sounds like it was a ton of fun for the boys though! I can't wait to hear about Prima Donna's party! I hope you have a relaxing Suday after such a busy week!

I think that planning parties for children is hard because nothing ever goes as planned and you always have extra time no matter how many activities you thought to bring along. Way to make this party a success.