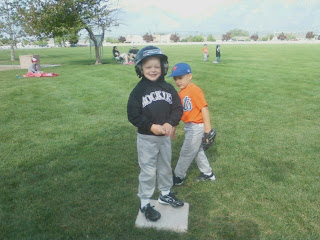 Remember way back in March when we signed Curly up for baseball? He was so excited to be playing in the Big Leagues like his brother! Well, it just so happened that my sweetie came home early today to take me to the doctor (all is healing nicely, it just takes time...) then we hung around together until it was time for Curly's ballgame. Turns out it was his last game of the season! 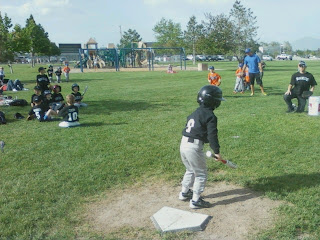 I was wishing I would have grabbed the good camera, but I did get a few cell pics I convinced Sport to take for me. Curly has loved playing baseball! His favorite part of t-ball is being the last batter and hitting a home run!

After Curly's game we went to Sport's game. They lost 9 - 7 and they were pretty disappointed. 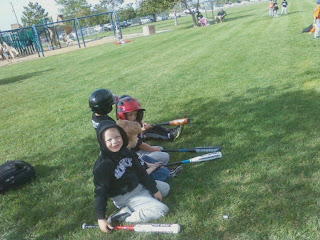 Then I spent the rest of my evening building a castle. Crafty has had this assignment for weeks now, but for some reason she spent most of her time planning and just looking at her pile of supplies. She was afraid to do anything because she thought she might mess something up! So now she had to do all the work in about 48 hours.

Over the years I have become quite a pro at duct tape. When Prima Donna was a 6th grader we covered her castle completely with duct tape and it looked pretty good. Crafty remembered that and decided she wanted to do the same thing with hers. So that was my job, to help with the duct tape. I also made the flags for Princess's castle and we recycle those every year. These are the third towers they have been on. 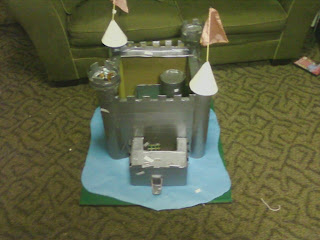 I think it turned out pretty good.  I just wish we could put the whole thing in a safe place until Sport is in 6th grade. But what would that teach us? Maybe to start a little sooner?

It would definitely save us $10 worth of duct tape!

Duct tape castle! That is so awesome! WE use Duct tape all the time too here to correct remedies. Love the baseball pics!