Once Upon a Mattress 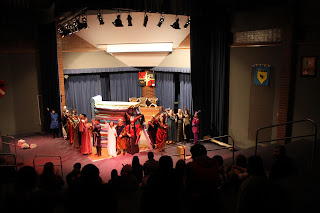 Prima Donna has been extremely busy the last few weeks and part of the reason for that has been the play she is doing for her theater class. They had auditions a couple of months ago and while she was hoping to get a major part, she knew her dance and band schedules would probably keep that from happening. 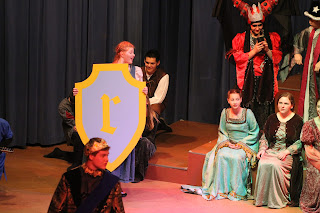 The play was Once Upon A Mattress which is a derivative of Princess and the Pea, and the part she wanted was the queen although she loved the music for the female lead as well. The biggest problem with the lead part is the fact that the Prima Donna is now 5'10" and since she is still in middle school, few of the boys are even close to that. 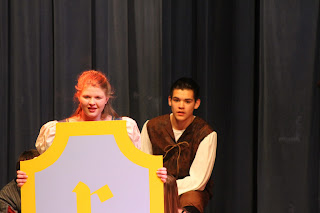 There were actually three performances, one for the school and two for the parents. We attended on Wednesday night because it was easier with the ballgame schedule. Prima Donna did an excellent job! She is a born actress and could likely go far in that area if she wanted to put in the time. She is taking theater next year so we will see if it is something that will hold her interest. 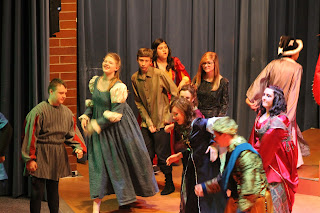 We took a bunch of pictures for you, but they are a little dark since they wouldn't let us use the flash. The bed had 20 mattresses on it! Crafty counted them. (Too bad my sweetie had put away the camera by the time they got it out.) Our favorite part was at the end when the ladies-in-waiting and the knights pulled out all the rocks, boxes, logs, and a huge "dinosaur" bone from beneath the mattresses.

I love school plays! you are lucky to have such a talented daughter in your mist!