Guest Blogger: The Birthday Party by Teach (and Mom) 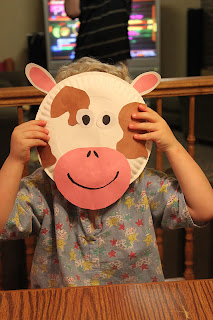 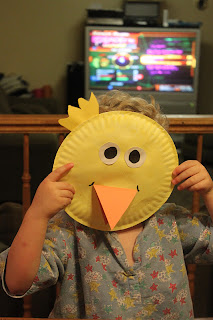 Scout’s turning six here shortly and we decided to have a birthday party for her.  I’m not sure what made Mom decide upon a farm animal theme… but, that’s what we got and it turned out to be spectacular! I was told about these masks some time on Saturday and we didn’t actually start working on them until about 8:30 on Sunday night.

Mom and I created an example of each one and then made four kits per animal.  We had a dog, cow, pig, horse, lamb and duck.  The lamb was totally my own design.  Mom mostly created the horse. The duck was collaborative and the rest were slight variations from templates found online.  It was super fun.

Speaking of… we listened to this song about 50 times while doing it.  Curly even started to sing along! “And you kiss the dog on the eye!”  Not quite, but close enough. The birthday party was today… but we’ll fill you in on that tomorrow! Which mask is your favorite? I’m absolutely in love with all of them! 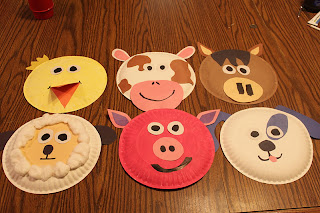 Teach makes me sound like this was a stupid idea, but now I want to tell you how it went down. Scout wanted to invite all her neighborhood friends and all of her school friends to her birthday party. I have been stressing about this party for about three weeks because I just couldn’t come up with a boy/girl theme I could do inside because the weather might be dicey. Oh, and it had to be really cool because we did the carnival thing for Sport and the magic show for Crafty. Lastly, it had to be cheap. It was a pretty tall order and with all the craziness around here, I felt pretty brain dead. 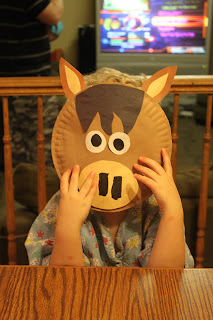 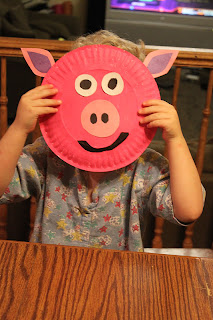 So I did what I always do in these desperate situations,
I resorted to saying a little prayer.
OK, it was a lot of prayer! And after a couple of days of that, it was all laid out for me in my brain, all at once. The invites were homemade and invited the kids to come and “play” at Scout’s birthday party. Then we made the animal masks and the Drama Queen dressed up as Old McDonald.

We ended up with 21 kids and after making the masks they played Duck Duck Goose, Farmer in the Dell, and a few other “animal” games. Then we split them into groups and let them perform the Old McDonald song on the stage. We even filmed them so I can make DVDs to send home with them all next week. The Drama Queen made balloon animals and we had cupcakes with marshmallow-shaped dogs that she designed all by herself. It’s so nice to have such creative daughters! 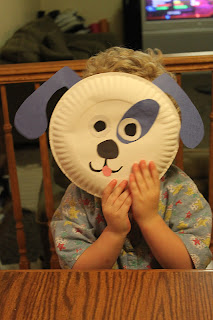 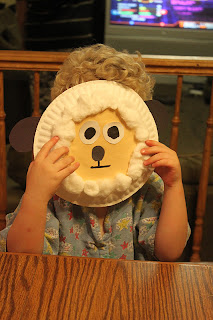 I actually think it was one of the best, most organized parties we have ever done. We finished up with 3 minutes to spare and all the kids seemed to have fun and there was no blood. I handed them treat bags with tootsie rolls and “play”doh on their way out the door. All for less than ten bucks total and a few random supplies I already had! It just doesn’t get any better than that…and yeah, I’ll be hitting my knees again tonight.

I think those farm animals masks are adorable. My boys would love to make them. You guys are always so creative.

Can I make a reservation? I would like the help of some crafty kids in mid February LOL I am always struggling to find cute party ideas.... mind if I steal this one?? My daughter turning 7 LOVES animals!!

A party with 21 kids and there was no blood?
It sounds like a success to me:)

Great party ideas! I think the masks are all so cute, but the lion is my favorite! I also love the totally random pic!