Happy Pioneer Day! It has been a great day for me and my wife. When I asked my parents if they had any plans for Pioneer Day, they told me they weren't quite sure, so I ended up celebrating Pioneer Day with Puppy Lover's family up in North Salt Lake. Her parents, her sisters, nieces, and nephew were all there to celebrate. We had Sloppy Joes for dinner while we shared some fun family stories together. We even shared treats with each other, like Puppy Lover's parents shared doughnuts and I shared Sonic Pops (there are otter pops flavored with drinks from Sonic, and you can buy them at Walmart for a Seasonal Time only). 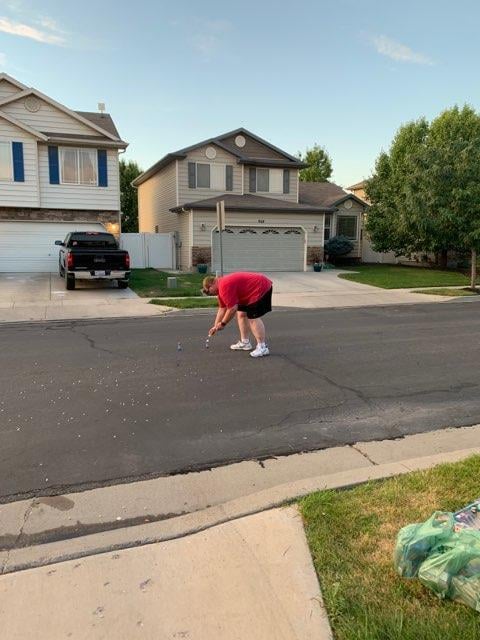 We played games and watched a movie together. until it was getting dark outside. That left me with the chance of setting up a Firework show for the family to watch, since it was Pioneer Day for us in Utah. I'm sure my Mom has told and taught you about what Pioneer Day is, so that won't surprise me. Anyway, the fireworks were a blast. I was in charge of the whole show for them. I put myself in charge of it, because it's been almost a decade ever since I got to light up the first firework in my life, but I'm sure my mom has told you that story before. We started with sparklers and I showed them the coolest firework that I never was willing to try before. Puppy Lover's niece, Bubba, wanted to try it too, so I ended up having two of these fun Fire Sabers that some people thought were made for sword fighting, but I told them that they were made to hold up in the air with one hand as if you're standing like a victorious warrior, as you can see in the picture. 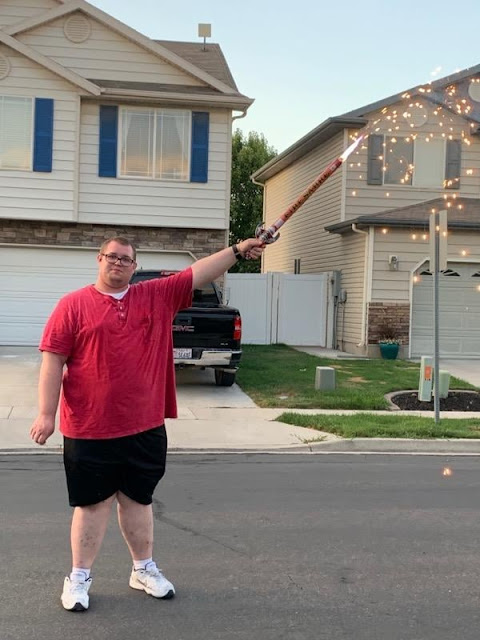 After the sparklers and the fire sabers, I was down to setting up regular fireworks to ignite. Bubba also wanted to try to light up some fireworks, so I let her have some turns until it was time for me to set up the Aerial Fireworks. The best Aerial firework that everyone liked was the Jumping Jelly Beans ones, because it looked a lot like candies jumping out of the box and it all ended in a snap! And then after that, it was time for me to finish off the show with a Grand Finale. The Grand Finale was so intense, because it was an Aerial Firework called Pyro DNA. It was supposed to shoot nine shots, but then after the first few, it entirely exploded and it went all over the street! We almost had to scatter away from the sparks, until they all disappeared. I understood why it was called Pyro DNA, because some of the hot sparks landed right on the tip of my shorts and it sheered up a hole, which almost burned my skin! But thankfully, nobody got hurt during the last bit of the firework show. 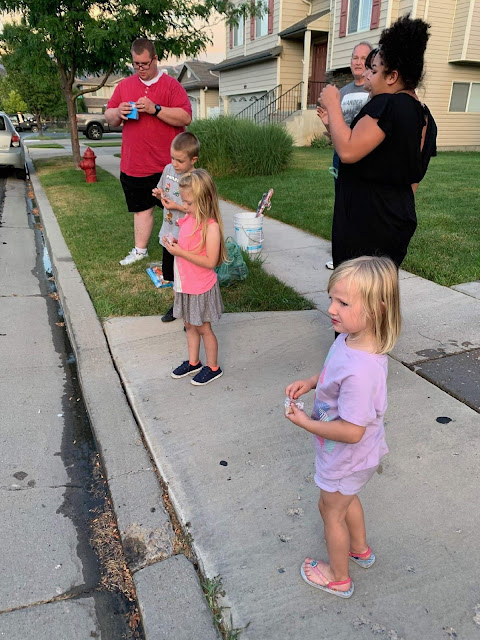 Right after the show, we cleaned up the mess and made sure the fireworks were soaked in water. Before it was time for some of the family to go home, they thanked me for buying the fireworks and setting up such a dazzling show for the History of the Days of '47. I hope you all had a good and a very safe Pioneer Day!
Posted by Mom of 12 at 7/25/2019 04:44:00 AM

Nate, you put on an awesome fireworks show for us. Thank you for making our day special! The grandchildren were so excited that you were going to do fireworks for us. We are so happy to have you as part of our family. It was truly a wonderful day and the fireworks were a great finale!!!

Thank you Dog Walker for sharing your 24th of July Celebration. I loved it so much. You did a great job of describing it. I loved everything that you did. I think it is so fun you could hard the day with your sweet wives family.
Blessings and hugs for you two!