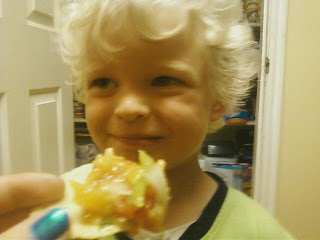 When we got married, my sweetie told me right up front that he didn’t like Mexican food. I’ve told you before that he had a phobia about those little canned tamales, and it had spread to all-things-Mexican (food that is). This was actually a problem for us because my only real cooking experience came from the couple of years I worked as a cook at Taco Time. I started working there at the ripe old age of 14 (in small towns there was no such thing as Child Labor Laws) for a $1.50/hour (which was also well below minimum wage). It was the fall of 1979 and I was tired of never having any money of my own. 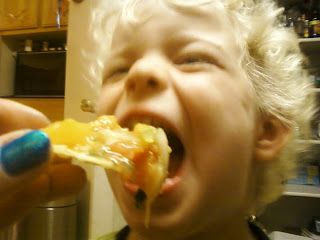 The owner was a grumpy grouchy sort of guy and he was well known for treating his workers terribly. When I had been there for about a month, I got sick and I was in bed with a fever. My mom called in for me and insisted that I stay home. It was a Friday night. On Saturday, I felt a little better so I showed up for my shift as usual. My boss came totally unglued! He screamed at me, telling me that if I didn’t want to work, then I just as well quit now. I didn’t say anything, just listened to his rant, then assured him I did want to keep my job (how is it this kind of stuff always happens to me?). I found out later that he had seen my boyfriend in town and naturally assumed that I had called in just so I could spend time with him.

I have lots of other Taco Time stories, but I think I’ll save them for another day. Taco Time has changed over the last 30 years, but back then, the only salsa they offered came in little packets. My sweetie makes an amazing salsa out of apricots and since we still have hundreds left on our tree (none of you have been by to pick any…) he mixed me up a big batch.

Now all of these measurements are approximate depending on the size of the fruit and veggies and the amount of heat you like in your salsa. When my sweetie finishes a batch, I am always the resident taster. I dip a chip here and then a chip there and tell him how to tweak it until it is just perfect for me.

lots of chips for dipping!

We start by chopping up all the veggies and fruit. We often use the food processor, but not for the tomatoes or the apricots. 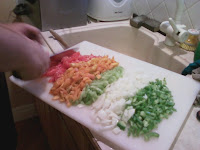 If you like it a little more mild, remove the seeds from the hot peppers. When you have everything chopped, put it all into a large bowl. Squeeze the limes over everything, then mince your garlic and add it. Chop the cilantro and sprinkle over the top. We like fresh ground pepper, about six grinds. Stir it all up. Make sure to taste test in several spots. We often have to add a few more apricots or a little more tomato. We almost always have to double the original amount of cilantro because we love that fresh taste. 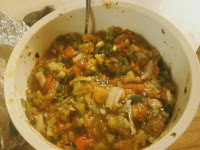 This fruity salsa needs to be served cold and then stored in the refrigerator. It only keeps 4 or 5 days and you really can’t put it into jars. When we have extras, we serve it over chicken or salmon. I’ve been known to eat only chips and salsa for an entire meal. Hope you love it! 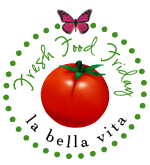 Mmm, looks delicious. I don't like sweet salsa with chips, but I love it over French Vanilla ice cream. My kids think I'm weird, but that just means more for me.

I've heard of mango salsa, but apricot!? Crazy!!! I just made salsa, maybe next time I'll use your recipe! Thanks!!!

Hi, friend! Thank you for visiting me! I have to say, you make me laugh. Quite a bit. That salsa sounds yummy. I have to say, I am not always a fan of fruit salsa, but this one sounds delicious!