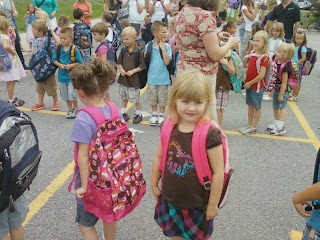 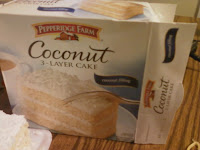 Today was Scout’s first day of kindergarten! She was so nervous this morning that she was sick to her stomach. For a minute I thought she might have to miss the first day, but after a nice long shower she was finally ready to go. Scout is my 10th child to head off to kindergarten, so you would think it wouldn’t affect me…but it does. By the time my sweetie got home from work and things had settled down a little, he could see that I was in need of some severe sugar. He suggested we pull our last Pepperidge Farm Coconut Cake from the freezer. It’s been chillin’ there for over a year, just waiting for the right special occasion.

Coconut cakes and I go way back. I was introduced to them by my grandparents. I’m pretty sure they were Grandpa’s favorite treat. You buy them in the freezer section, so when you pull them out of the box they are totally frozen. And that’s the ONLY way to eat them. Frozen and with a fork right off the square foam serving plate. Sometimes Grandma would buy one of the other flavors, but I’m sure she always regretted that decision. Oh, Grandpa would eat a chocolate one, but he would gripe about it the entire time. 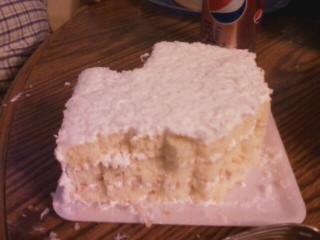 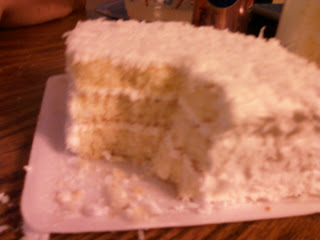 So sometime after my sweetie and I were married, I introduced him to Coconut Cake and the proper etiquette for sharing one. Always a chocolate man, he was skeptical at first, but after one bite he wholeheartedly agreed to become the devourer of the other two corners. Although I married the most amazing man on earth because now he only eats one corner and gives the other three to me. See my side of the cake? All the outer frosting is gone. He must have known I was going to write a post about this because look how nicely he hollowed out his corner and saved the edges for me.

OK, now that you are all looking for your car keys so you can run down to the grocery store and pick up one of these little gems, I want to tell you one more story. It happened in 2005. I was about 7 months pregnant with Scout and it was our 22nd anniversary. My sweetie took me out to dinner and while we were gone, the kids didn’t do their chores (as usual). So in an effort to divert our attention (it was our anniversary after all), they made us a lovely bubble bath so we could enjoy a nice romantic time in our bedroom. They had dimmed the lights and set out a couple of candles, carefully placed some towels, and filled the jetted tub with water and way too much soap (we carried laundry baskets full of bubbles to the shower later just so we could get in the tub!). They were so excited to show us their handiwork, they dragged us up the stairs the minute we walked through the front door.

As we surveyed the scene, one of the girls scanned the tub nervously. “What happened to the cake?” she finally asked. We glanced at the tub, but all we saw were crumbs and a square foam plate. The kids immediately started blaming each other for the missing cake. Annoyed, we shooed them out of the room. The mystery gradually unraveled when we discovered that the dog seemed to have no appetite for her supper. And I’m pretty sure I detected a drop or two of whipped cream in her brown hair. An entire Pepperidge Farm Coconut Cake devoured by a dog…Grandpa would have certainly griped about that!

I LOVE coconut! I think my perfect world would have mushrooms and onions in all my meals and chocolate & coconut in all my desserts. =P

I love those coconut cakes. I now need to add that to my grocery list. I think it's so sweet that your husband leaves you the edges.

I love those cakes! I'm so glad you mentioned eating them right off the little plate they come on, because my husband thinks I'm just lazy when I do that! But it tastes better.

umm i love thoose but i normally only get a small inside bight because you guys eat it all i hope you gave scout a big piece!

I have never had one- but I really am not a huge cocunut fan- but frozen- I just might be able to do it.

Thanks for stopping by my blog. Did you find me bloghopping? Your blog is fun. I read your son's post about Princesses. He did a great job!