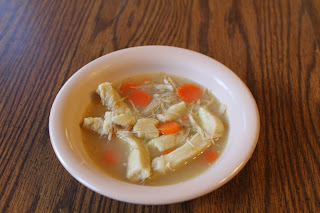 One of my favorite things to cook for this big family of mine is a turkey. I think I’ve told you before that I have three huge chest freezers and every year in November I buy about a dozen turkeys (when they are really cheap!) and use them all year. I can feed the family for almost a week on one large turkey.

We usually start with a traditional turkey dinner although not as big and fancy as Thanksgiving. Then we have leftovers for the next night. Then it’s often turkey sandwiches for lunches. Then I cook down the turkey and pull what’s left off the bones. That leaves me with enough for a couple more meals, Turkey Rice Casserole, and Turkey Soup.

I swear my kids could eat Turkey Soup once a week and be perfectly content for the rest of their lives. That’s because my sweetie has an amazing recipe for homemade noodles that he got from my MIL. I had never eaten homemade noodles until I met my sweetie. They are SOO much better than packaged pasta! And they really aren’t that hard to make. We usually make about three batches of noodles and then we have enough soup for a couple of meals. See, what did I tell you? One turkey…a whole week’s worth of meals. Hope you love it!

Place the turkey bones (they still need to have a little meat on them) into a large pot and fill the pot about halfway up with hot water. Bring to a boil and let simmer for about an hour. While it is simmering, add a little Poultry Seasoning, Thyme, and some cracked black pepper. Cover. 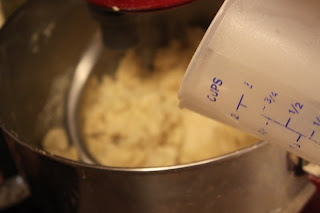 After boiling the turkey, let cool for a bit and then strain off the stock (or juice created by the water that covered the turkey). Put the stock in the pan and then pull the turkey from the bones. Cut it into small pieces so it won't be stringy. Toss the cut turkey back into the stock. Don't overload it. If you have more than you need you can always use it for something else like a casserole. Turn the heat back up. You will probably want to add a couple of chicken bouillon cubes to give your stock plenty of flavor. Peel several carrots and chunk them up and add them to the pot. You can add other veggies if you wish. Over the years my sweetie has sometimes put in potatoes or celery. The kids prefer it with just carrots (in fact, some of them would prefer nothing!) but I like the color and the flavor. It needs to boil until the carrots are soft, so that is plenty of time to make the noodles. 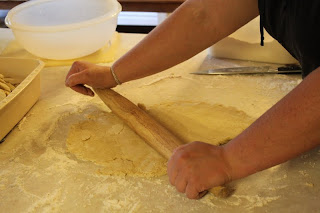 Change to dough hook.
Add another 1/3 cup of water if needed.

Make at least two batches because you will want to put lots of noodles in your soup.

Roll your dough as thin as you can (about ½ inch) and roll it up like a jellyroll. 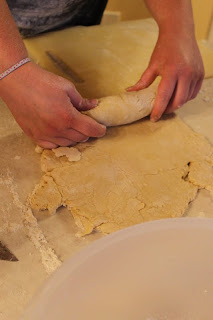 Slice it off in ½-inch slices.  Make sure you dust everything well with flour since the flour helps your soup to thicken. 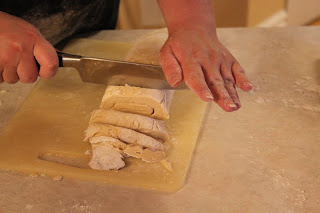 Unroll all the cut noodles into a bowl and then add them to your soup.  (Don't skip this step! If you don't unroll the noodles, they will become a massive blob!) 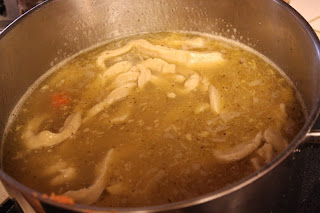 Make sure you stir it once in a while and cook it for 10 – 15 minutes on med-low heat.  Add lots of black pepper.  When the noodles are totally cooked, the soup is done. 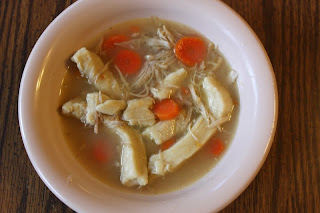 Email ThisBlogThis!Share to TwitterShare to FacebookShare to Pinterest
Labels: Food for Thought, sweetie

can't wait to try this!!

Turkey and turkey soup rock! My grandma always made homemade noodles but I've never actually given it a shot - they are the BEST though! My oldest daughter has celiac and so I'm going to try making homemade noodles with rice flour for her - thanks for the inspiration! :)
www.blissfuldomesticgoddess.com

I've always wanted to try making noodles, I will definitely try these.

This looks delicious! I have never had homemade noodles before and I always thought they were a lot harder to make. I can't wait to try these! :)

Thanks for sharing a great tutorial on makeing Turkey Soup. My father in law used to make homemade noodles and I have always wanted to learn how to do it. I may try this for sure.
Blessings to you!

great recipe! i am just so impressed with your homemade cooking and all the kids! you are super mom!